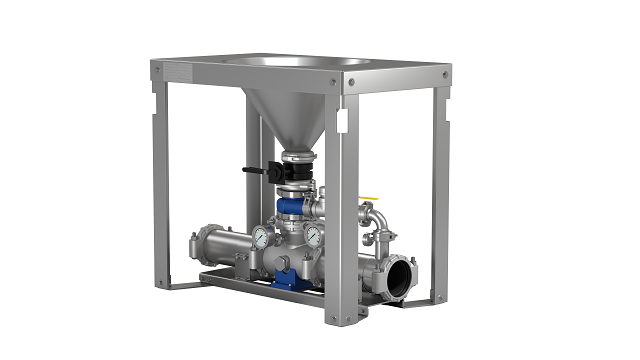 The mixing of chemical additives into drilling mud is a critical process that can have a significant impact on the overall time and cost of drilling a well. However, mud mixing commonly receives less attention than other drilling processes because of its perceived simplicity. This can often lead to the selection of low cost, low tech, outdated mud mixing equipment that does not promote additive waste reduction, and is not fully capable of keeping pace with other drilling processes on today’s modern drilling rig. The Alfa Laval Vortex Shear-Mixer is an advanced, yet simple, mixer that vastly outperforms traditional mud mixing hoppers. The shear-mixer is nearly impossible to plug and has the highest additive loading rate of any venturi style mixer.

It also features a number of exclusive advantages that lead to abundant cost savings – related to both chemical additives and time, including:

The Alfa Laval Vortex Shear-Mixer consists of a single or dual suction port Lobestar mixing eductor with a radial premixer. The basic configuration includes a heavy duty, stainless steel, parabolic, table top hopper with support legs. The entire assembly is mounted on a skid base for easy transport and placement, and the standard inlet and discharge connections are grooved end piping with grooved style couplings. The typical shear-mixer size for drilling applications is 6” or 4” and is dependent on the rig mud system volumes or the desired mud processing rate.

Drilling mud is pumped at a high rate through the replaceable Lobestar Mixing Nozzle® insert – found inside the Lobestar Mixing Eductor® sub-component of the shear-mixer. The resulting pressure drop across the nozzle creates a high velocity fluid stream and generates an incredibly strong vacuum for maximum solid or liquid additive loading. The Lobestar Mixing Nozzle® produces multiple jet streams, each of which consists of a core with oscillating vortex rings that expand into overlapping plumes. This flow pattern results in a highly energized fluid boundary layer, promoting turbulent, dynamic fluid shearing, rapid hydration of additives, and uniform dispersion. The specialized diffuser insert found downstream of the nozzle helps recover the maximum amount of available pressure lost across the nozzle. This allows the mixed fluid to be transported greater distances and up higher elevations through the piping, downstream of the mixer, and back to the mud pits.

The radial premixer sub-component of the system is used to “pre-wet” chemical additive particles, preventing clumps of additive particles from appearing in the mixed fluid as fish eyes or microgels. Fluid is passively diverted from the primary inlet of the shear-mixer to the radial premixer where a swirling flow pattern is created, generating a vortex of air and fluid. This vortex disperses additive particles evenly into a low pressure, swirling eye of fluid, effectively pre-wetting them before they are sheared into the drilling mud by the Lobestar Mixing Nozzle®.