In South Korea, construction of the world’s first floating liquefied natural gas plant is under way. When completed it will allow natural gas to be harvested in difficult-to-reach or otherwise constrained underwater locations and processed directly on site. Alfa Laval technology is part of the project.

Natural gas has become the fastestgrowing energy resource in the world. Although it is a fossil fuel, it is the cleanestburning fossil fuel, and as such it is a cleaner alternative to oil – and especially to coal. Both coal and oil release higher levels of harmful emissions. In particular, coal produces twice as much carbon dioxide as natural gas, as well as much higher levels of nitrogen oxides (NOx), sulphur dioxide (SO2) and ash particles that contribute to pollution.

But the richest natural gas fields can be under the sea floor and difficult to reach, which is why there have been plans for more than a decade to build a floating liquefied natural gas (FLNG) plant that processes the gas directly on site. The gas is cooled to minus 162° C, where it takes a liquid form, shrinking in volume by a factor of 600, allowing it to be shipped.

Alfa Laval is now a part of the first FLNG facility under construction, Shell’s Prelude FLNG project which will be located off the coast of Australia, thanks to a recent agreement with the Technip Samsung Consortium to supply equipment to the facility.

Alfa Laval will deliver sea water filters, desalination units (which convert seawater to freshwater to be used for steam generation, process water and potable water), heat exchangers that use seawater to cool the cooling medium used in the vital cooling applications in the gas liquefaction process, and heat exchangers and separators for the gas treatment processes.

The FLNG facilities may also help decrease the potential environmental impact of operating a plant on land since they eliminate the need for pipelines and other infrastructure onshore.

The Prelude facility will measure 488 metres from bow to stern, six times the length of a Boeing 747. It will be stationed more than 200 kilometres offshore in Western Australia. 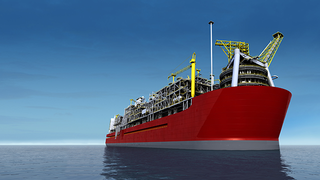