Sustainability as a business strategy

Sustainability is now firmly on management agendas worldwide, according to a new report. Sustainable business practices are not only positive for the planet and its inhabitants, but they are also good for the bottom line.

Companies around the world are slowly but surely coming round to the realization that sustainability is good for business. They are waking up to the fact that it pays to take a long-term perspective, anticipate the future and create stronger, healthier and more prosperous markets to sell into.

There has also been a realization – amongst Big Business as well as the activists and the protesters of the Occupy Wall Street movement – that a focus on profits in the short term contributed to the shaky global economic situation of the past five years. As Samuel J Dipiazza Jr, president of PricewaterhouseCoopers, has stated: "The current financial crisis is the result of short-term and unsustainable business models.”

Sustainability is now firmly established in many boardrooms, partly as a response to consumer demand but also because of a growing awareness that being sustainable can contribute to long-term business success. A new report by MIT Sloan Management Review, in collaboration with the Boston Consulting Group, found that 70 percent of companies have placed sustainability permanently on their management agendas. More than two-thirds say their organization’s commitment to sustainability has increased in the past year, and an even larger proportion say they plan to increase their commitment to sustainability. Two-thirds of those surveyed said that sustainability is necessary to being competitive in today’s marketplace, up from 55 percent the year before.

Bo Viktor Nylund, head of corporate social responsibility at UNICEF, says companies have tremendous potential to contribute to sustainable development. “Many companies are bigger than states in terms of their financial turnover and have massive financial resources at their disposal,” he says. “If you look at today’s financial situation, where government budgets are highly strained, the potential of the corporate sector to contribute to sustainable development is greater than ever.” Haanaes says the private sector has an important role in putting the planet on a more sustainable path because that is where the technical solutions that are needed will come from. “Companies are extremely powerful because the fundamental challenges we are facing will require enormous innovation and enormous improvements in productivity,” he says. “And which organizations globally are able to do this? It’s the companies. Sure, regulation is important, frameworks are important, but most of the solutions will actually come out of new business practices, new innovations, new ways of addressing customer needs.”

Interestingly, and contrary to what one might expect, the report found that many companies are actually increasing their commitment to sustainability initiatives despite the current economic uncertainty. “I think that is in part driven by uncertainty on the resource side,” Haanaes says. “Resource and energy prices make companies look at ways of being more efficient. Another driver is that companies identify sustainability as a megatrend, something that it is worth addressing today because waiting until tomorrow might be more costly, and they might gain benefits by moving early.”

Two companies that have fallen foul of sustainability campaigners and then learned their lessons and become CSR role models are Nike and Kimberly-Clark. Both have been subjected in the past to stinging criticism for their production methods – Nike for sweatshops and other human rights violations, and Kimberly-Clark for cutting down old-growth boreal forests. But then, in 2010, Nike was named by the Ethisphere Institute as one of the world’s most ethical companies, and from 2005 to 2009 Kimberly- Clark was ranked first in the Dow Jones sustainability world index in the personal products category.

Nylund says that UNICEF sees children’s rights as an essential investment in a sustainable future and that safeguarding these rights helps build the strong, well-educated communities that are vital for a stable and productive business environment. In March, UNICEF, together with the UN Global Compact and Save the Children, launched the Children’s Rights and Business Principles to identify a range of actions that all businesses should take to respect children’s rights.

Nyland is generally positive about the business community’s response to the initiative. “But as with any organizational change process, there are people who really believe in the agenda and want to make it happen, and then there are people who primarily look at short-term gains and not really what is in the long-term interests of the business,” he says. “What I hear from business is that it also takes time for them to do the convincing internally. It’s not just about convincing one person, it’s about a process within business as well.”

Besides making their own operations and processes more sustainable, companies that are sustainable-minded can encourage others to get on board by choosing to do business with partners such as suppliers who themselves are active in corporate social responsibility, Nylund says.

“Supply chain issues are tremendously important,” he says. “Large corporations can work with their business partners to introduce this agenda and not deal with companies that don’t live up to their own high standards.”

Haanaes says the study has revealed new evidence that companies are making a strong commitment to sustainable business practices and are investing time and money in strategies that address a business environment that is increasingly shaped by climate change, resource scarcity, regulatory uncertainty and economic volatility.

“If you look at most industrial companies, including Alfa Laval, and compare them with how they operated 30 – or even 10 – years ago, they have made huge strides,” he says. “I think they will continue to do that. I don’t foresee a day when every company is fully sustainable, but we are really seeing great improvements across industries and in all regions of the world.” 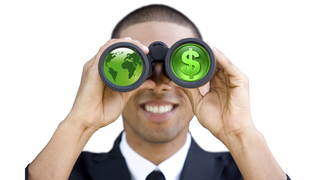