One bold decision made all the difference to the Falconara refinery in Italy. By replacing an air cooler with two Alfa Laval Compabloc heat exchangers, the refinery not only cut its yearly costs by as much as EUR 3 million, but it also reduced its environmental footprint.

Perched four storeys up the side of the topping facility at the Falconara Maritime refinery in Ancona, Italy, are two nondescript pale-blue boxes, roughly the size and shape of old-fashioned phone booths. These have helped transform the 60-year-old refinery into one of the most technologically advanced refineries in Italy.

The Falconara refinery, owned and operated by Rome-based petroleum giant Gruppo API, covers 70 hectares near the Port of Ancona and processes an average of some 85,000 barrels of mostly Middle Eastern crude oil a day. The refinery opened for business in 1950, and about 10 years ago it began its journey towards a position at the vanguard of Italian petroleum processing plants.

Step by step the different parts of the refinery have been examined and improved. A major breakthrough came in 2009 when Falconara’s maintenance of the second-stage overhead air coolers in the crude distillation units showed that by making changes to the system the plant could optimize the heat it produced more efficiently. Officials had the option of either replacing the damaged air coolers with the same technology or installing new but unfamiliar Alfa Laval Compabloc welded plate heat exchangers designed to recover heat otherwise wasted in that part of the refining process.

It was not a decision the refinery took lightly. Most refineries that choose cutting-edge heat exchangers as part of the distillation process do so when the refinery is being built. But at Falconara, the installation would require the complex and costly retrofitting of an existing facility.

Before deciding, the company sent a team to Collombey, Switzerland, to study the Tamoil refinery there. The Collombey refinery had made a similar switch to the same Alfa Laval Compabloc heat exchangers some 12 years earlier. The Falconara officials liked what they saw and heard and decided to make the change.

“We studied the problem very carefully,” says engineer Alfredo Punzo, technology manager at the Falconara refinery and one of the API officials who made the exploratory trip to Switzerland. “Part of the evaluation was to speak to the engineer in charge at Collombey. He said that they had had no problem with the heat exchangers and that they would do it again. We learned the value of using the heat exchangers as well as the best way to design and lay the system out.”

Once the decision was made, things moved quickly. The official proposal to install the Alfa Laval Compabloc heat exchangers was made in September 2009, with the feasibility study completed the following month and the process study finished a month after that, including modifications to other parts of the refinery to allow the new units to operate at maximum efficiency.

The detailed project plan, including the strategy for shifting operations from the outdated air-cooling shell-and-tube unit that had been operating there to the new plate heat exchangers was finalized in February 2010. The training of workers got under way, and the start-up was carried out on schedule on 7 April 2010 – less than nine months after the initial decision was made.

From the outside, the Alfa Laval heat exchangers look like simple metal boxes. But the simple exterior belies the complex work being done inside the two units, which direct heat from the top fraction, known as the virgin naphtha, so it can be used to preheat the crude oil feed to the furnaces and generate hot water for the refinery.

Previously this heat was released into the atmosphere, a common solution in the processing industries where, according to the International Energy Agency, some 50 percent more energy is used than necessary. At the Falconara plant the switch from the outdated air coolers to Alfa Laval Compabloc heat exchangers has meant significant cost savings.

“The idea is to burn the least amount possible,” says Marco Silva, energy manager at Alfa Laval in Italy. “The Compabloc heat exchangers are designed to capture the heat so the refinery can reuse it.”

Punzo estimates that the Compabloc units paid for themselves within a year through the savings generated. The units have an estimated lifespan of around 25 years. With such a short payback period, savings start accumulating in the second year – an important benefit in a time of escalating energy prices.

There are other benefits as well. The technology helps the refinery to burn less fuel, meaning that it releases less carbon dioxide and other greenhouse gases into the atmosphere, making Falconara one of the few Italian refineries to earn an environmental white certificate from the European Union.

The reduction of heat released into the atmosphere also improved working conditions for those operating near that part of the plant.

And the heat exchangers require minimal maintenance. Punzo says that so far the refinery has not had to contact Alfa Laval for any kind of cleaning or maintenance. “Based on their performance so far, I predict that the units may never need care,” he says.

All in all there are many advantages. “It might be difficult to quantify the exact cost benefits from using these heat exchange units because many of the benefits are intangible or indirect,” Punzo says. “But so far we are very happy we made this decision, and we would definitely do it again.”

Falconara officials believe that more Italian refineries will eventually choose to retrofit the technology into their plants and that as new refineries are built they will incorporate new heat exchangers into their designs. 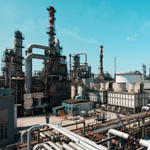